323ink began its business in 1969 — originally as T & L Printing — as an offset printing company. A little more than a decade ago, the company decided to offer apparel services to their print clients and created a one-stop shop for marketing and promotional materials.

“We differentiated ourselves by doing it all,” said 323ink’s Doug Comingore. “We offer commercial printing like thousands of other print shops, but we also produce our clients’ embroidered and screen printed apparel in the same shop. This approach maximizes our clients’ branding efforts through a level of consistency achievable only with a one stop setup.”

Initially, 323ink outsourced its apparel services to a wholesale company, but as business grew and a concerted effort for consistency across the different areas of their business increased, the company brought the services in house by screen printing on manual machines. After a few years, it became impossible to keep up with the demand on a manual press. The decision was made to purchase Anatol’s Volt-S at a trade show.

“Using a manual press to try to do multicolor imprints was driving us crazy. It was just too slow. The Volt allowed us to do three and four colors in less run time than a one color run on our manual press,” Comingore explained. “It allowed us to grow our business, basically without hiring anyone.”

In fact, 323ink has more than doubled its screen printing business since the addition of the Volt-S more than two years ago. The machine requires so little setup that the company’s staff spends less time producing screen printed apparel than it did before the Volt-S was purchased.

“In an eight hour shift, we can easily get four to five times as much out as a manual press. We definitely have grown tremendously, and we still have one person running the screen press.” The other major advantage to the Volt-S was that it was an all-electric machine. It doesn’t rely on air compressors or air lines. That allowed 323ink to get the machine up and running quickly, which was important for the busy shop, Comingore said.

“The day we brought it in, the shop was pretty busy. The intuitive setup was great and reduced the learning curve that we had expected. We were able to put the machine straight into actual client production runs.” With the all-electric machine, Comingore added, the shop has to worry less about malfunctioning parts, and without an air compressor, the Volt-S doesn’t add noise to the busy shop.

While other companies offer all-electric machines, the Volt is the only truly professional-grade model on the market. Comingore chose the Volt-S because of its ability to produce consistent color and quality prints. Coming from the world of paper printing, 323ink has extremely high standards. “We throw away prints in our shop that others would ship out. Picky describes us perfectly,” Comingore said. With the Volt-S, however, Comingore’s staff knows that the product will come out well, whether they are doing a run of 30 shirts, or a run of 1000.

Comingore has been happy with the Volt’s performance, and with the follow-up service he has received from Anatol since purchasing the machine. While Comingore would advise any company making a major purchase to thoroughly research their options, he’d encourage them to consider a Volt.

“I would definitely say Anatol is one to check out,” Comingore said. “It has some distinct advantages in setup and the way it’s run through its interface that I think makes a difference.”

“If I were to buy another machine, I’d go to the Volt first. I would buy it again.” 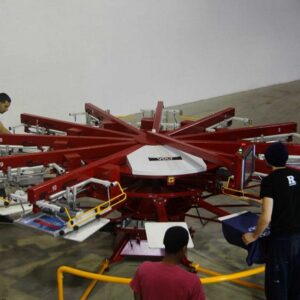