Scott Adkins began laying down prints on athletic jerseys about 10 years ago to fill his own apparel decorating needs. As a coach for his son’s wrestling team, Adkins was frustrated with the quality of the apparel he received from local printers:

“There would be a shirt size wrong, something wouldn’t get delivered,” Adkins explained. “I just started out, I bought a heat press and I thought, ‘I’m going to try this because I’m tired of getting stuff wrong and playing catch up.'”

That independent venture soon became a side business for Adkins, an engineer by day, and his wife.

“People knew I was printing and they’d ask, ‘Would you mind doing a job for us?'” Adkins said.

Adkins would take those jobs, eventually adding a manual screen printing press to the heat press in his home. He enjoyed the work and enjoyed operating a casual side business. His customers kept asking him to open a full-time shop, Adkins said, but he initially resisted.

Adkins’ business model changed last year, however. His son, then a junior in college, came to him with the idea of screen printing athletic wear for colleges and high schools and donating a portion of profits back to the school as scholarships.

It was quickly apparent that the manual press Adkins was using wasn’t going to be able to meet the demand of printing from the university.

“With our manual machine, we weren’t going to be able to keep up,” Adkins said.

He headed to a trade show to check out potential equipment upgrades, where a fellow printer overheard Adkins talking about his need for an automatic press and approached him.

“The guy heard us talking and asked ‘Have you heard of Anatol?'” Adkins said. “I said ‘no’ and he said ‘You have to look into it.'”

Adkins found an Anatol dealer nearby and checked out the Volt, and he knew the all-electric automatic press was a perfect fit. Without the need for a noisy compressor, the Volt could fit in the spare space adjacent to his wife’s hair and tanning salon.

“What I liked about the Volt is it didn’t need air. For me, air is a problem because when you have a leak, 1) it’s noisy and 2) it’s expensive to fix,” Adkins said. The Volt is so quiet that customers in the hair salon on the other side of the wall have no idea the machine is churning out shirts so nearby. And the Volt operates so quickly that the tanning shop employees can pull, fold and box shirts as they come off the press without interrupting business in the salon.

The ease and speed of printing on the Volt has been a game changer for Adkins, who was so accustomed to printing on a manual press: “My son and I run it, and now we can do some large orders of 2,000+ pieces. We do about 400 shirts an hour.” That means Adkins can produce large-scale orders in a few hours after his normal day job. Work that would have taken a week can now be completed in an evening.

Not only has the speed of the Volt given Adkins the ability to take on larger orders, he said it also has attracted more customers because those who see video of him printing on the Volt know he has the ability to turn out high quality apparel with a very short turnaround time.

Adkins also has been amazed at how easy operating the Volt is. After printing for years on a manual press, Adkins said it’s noticeable how much less wear and tear on his body there is while printing on the Volt. He also uses less ink, because the automatic machine is able to put more ink through a fine-mesh screen than he could while printing manually.

“I use fewer materials. Literally, my profits increased,” Adkins said. “It’s hard for people to believe. I know because I keep the numbers. And now those increased profits can add to scholarships in the Tuition Threads business model.”

For the next year as his son finishes college, Adkins said he’s working to keep the demand for Tuition Threads contained because he doesn’t plan to quit his day job. But as Tyler completes his degree, Adkins wants to see Tuition Threads continue to grow, something he knows is possible because the Volt allows him to produce large orders at low cost, while giving something back to his customers.

“We’re going to continue to grow. We’re trying to keep it contained. It’s almost hard because our pricing structure is pretty competitive,” Adkins said. “You can be very competitive [with the Volt], but as people at the colleges and high schools are finding out: Wow, you get the pricing, and you get back a scholarship.”

For other printers looking to upgrade their businesses with automatic presses, Adkins encourages them to try out the Volt. Until you experience printing with the machine, Adkins said, it’s hard to comprehend the difference.

“People that have manual machines understand [that printing on an automatic is easier] but they probably wouldn’t believe how much easier until they try it,” Adkins said. “You can do three times the shirts with a third of the effort because you’re just putting the shirt on and taking it off and pushing a button.”

Back to Anatol Customer Stories
Other stories
Thomas Aguilera , Tshirts Printed 4 U 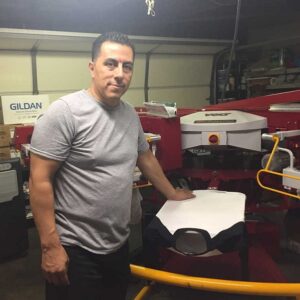 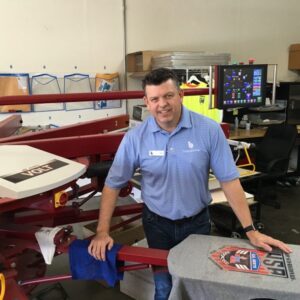